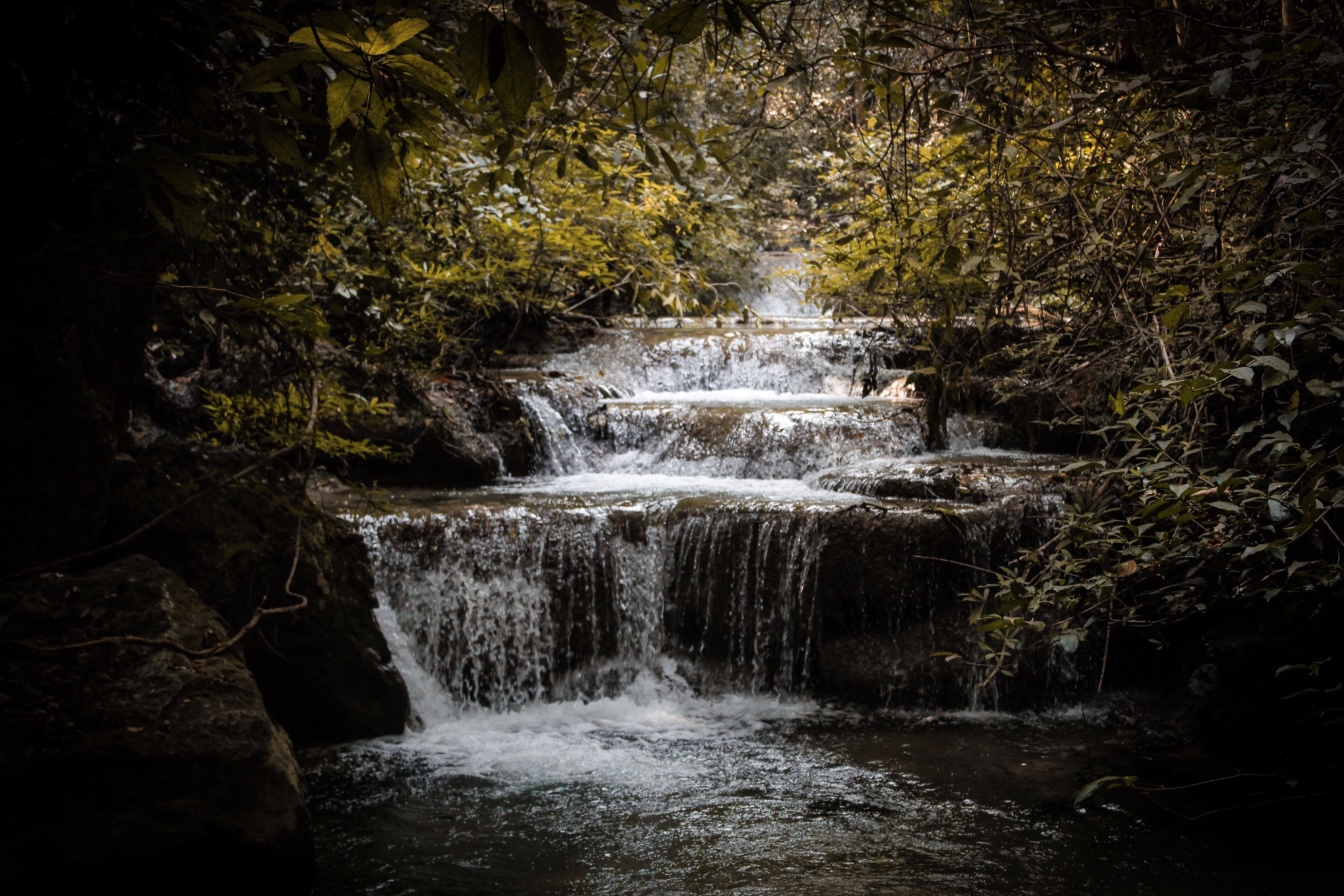 Kanchanaburi is a mere few hours out of Bangkok but is a completely different world. It’s quieter and steeped in contemporary history. It’s home to the real Bridge On The River Kwai. And is an awesome base to visit Hellfire Pass and the magnificent Erawan waterfall. It’s not a Thai beach, but it’s totally worth your time! Here’s why you should travel to Kanchanaburi, Thailand.

Kanchanaburi at times seems dated, and there are a few issues regarding tourists and those in charge of the attractions not respecting the sombre history of the area (I’ll explain).

However for those interested in contemporary history, this is a place for you.

Also, the Erawan waterfalls, which are near Kanchanaburi, are some of the most beautiful waterfalls I’ve seen on my travels and are very well maintained. If you like history and waterfalls, you should travel to Kanchanaburi! 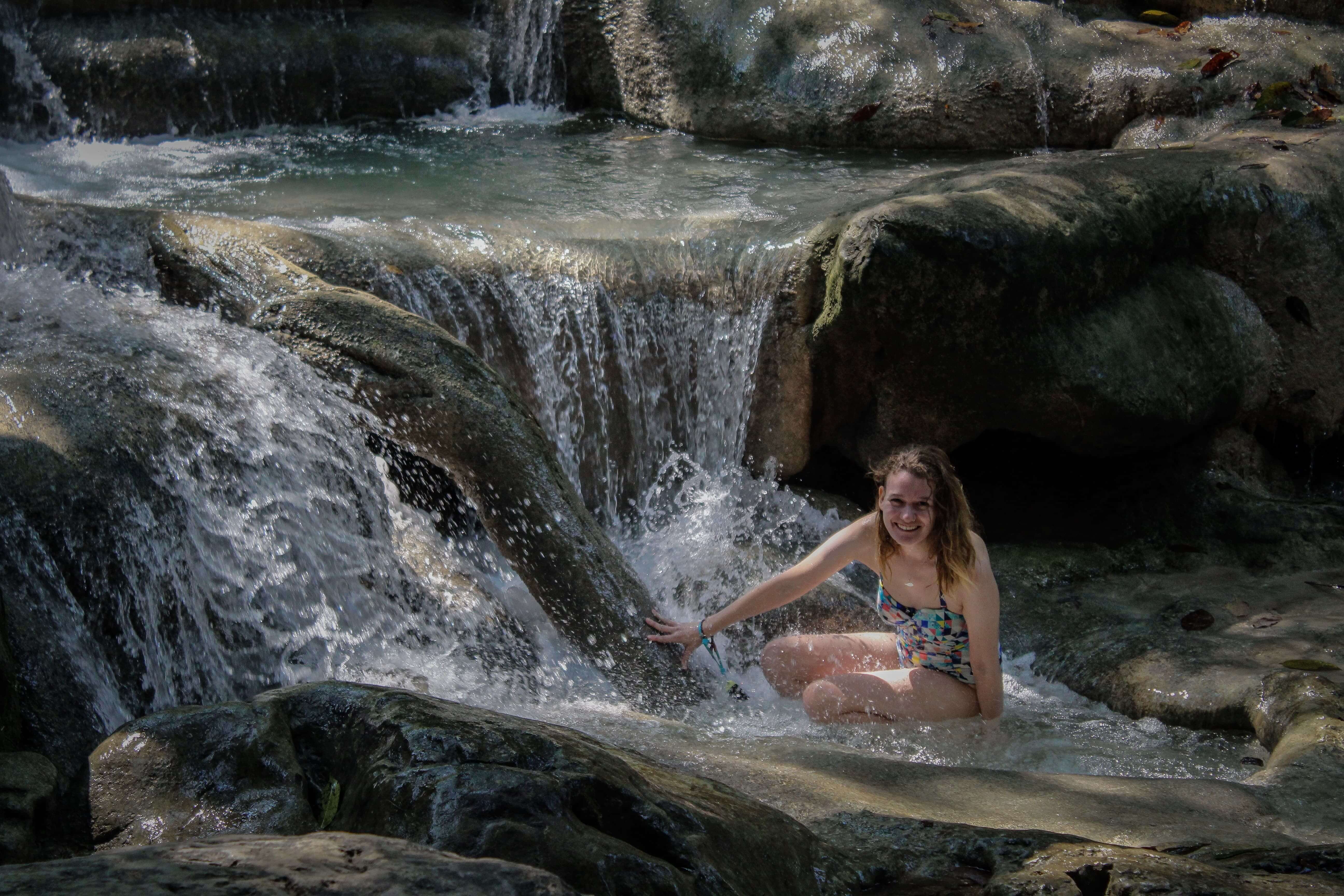 Sometimes you do things when travelling and they just make you go WOW.

Although some people think they are over-hyped, the Erawan waterfalls were a WOW moment for me. Erawan waterfalls has seven beautiful tiers you can climb up to. You can take a dip and have little fish (and big ones) nibbling your feet, it’s a bit magical. If you love fairy tale waterfalls, you should travel to Kanchanaburi.

It gets very busy with locals at the weekend, so try to go during the week. We went on a Monday. Tiers 1 and 2 get pretty busy. The further up you climb, the quieter the waterfalls were, aside from the seventh tier at the top of the waterfall where there were quite a few people.

At the waterfalls, staff are strict around food and water bottles. You have to leave your food at a stand early on and pay a deposit on your water bottle. To get your deposit back you show the staff your bottle on the way out. This is a bit of a pain but the waterfalls are immaculate because of this. 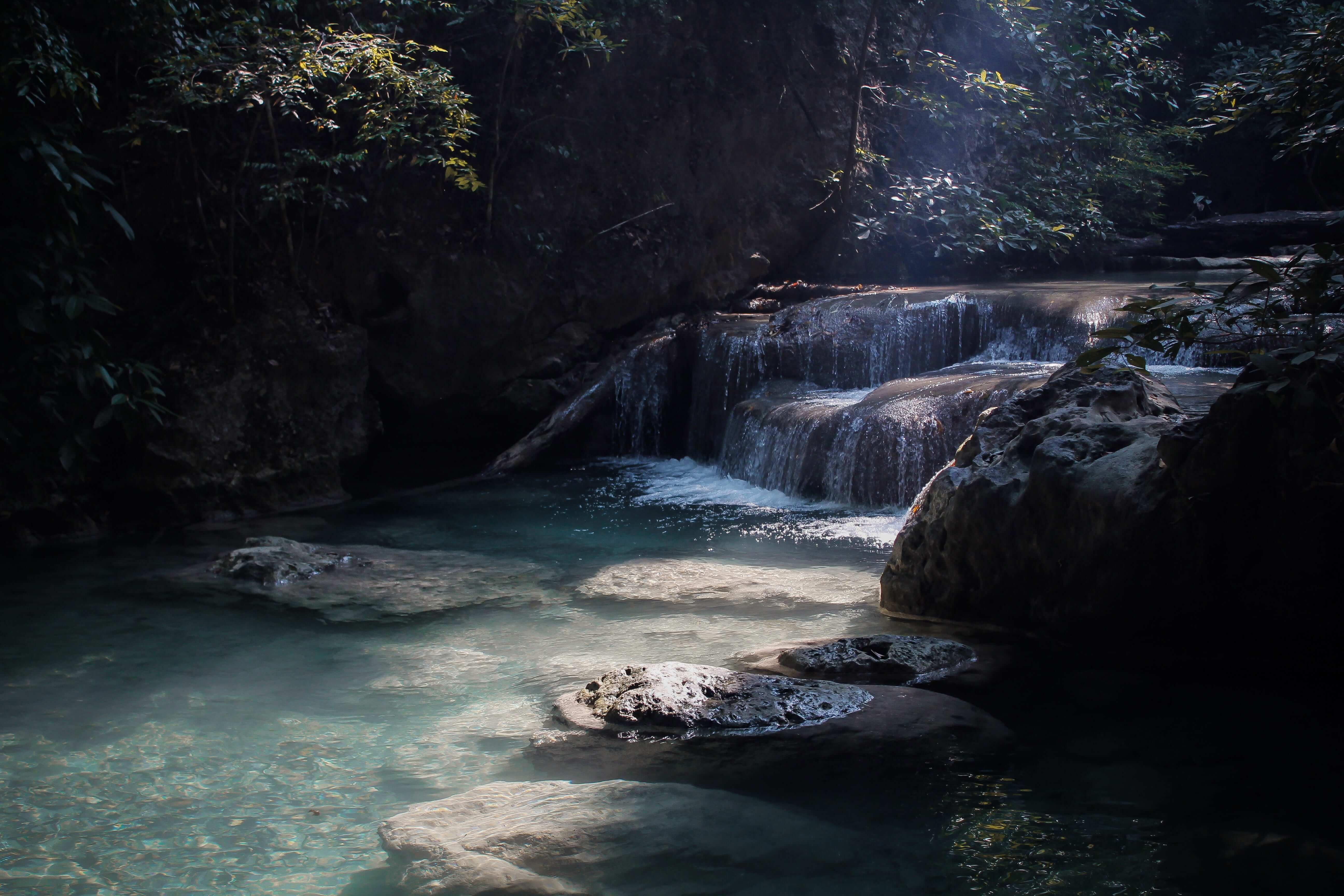 How To Get To Erawan Waterfall, Near Kanchanaburi:

We took the rickety old public bus to Erawan Falls from Kanchanaburi.

You can get the bus from:

The bus takes you all the way through the gates (stopping briefly so you can pay the person who jumps on) to the restaurants, changing rooms and information centre for Erawan Falls. The bus returning to Kanchanaburi goes from there. The journey takes about 1.5 hours each way.

Bring your passport as there are police checkpoints on the way and they want to see ID.

2. The Forgotten History Of Hellfire Pass 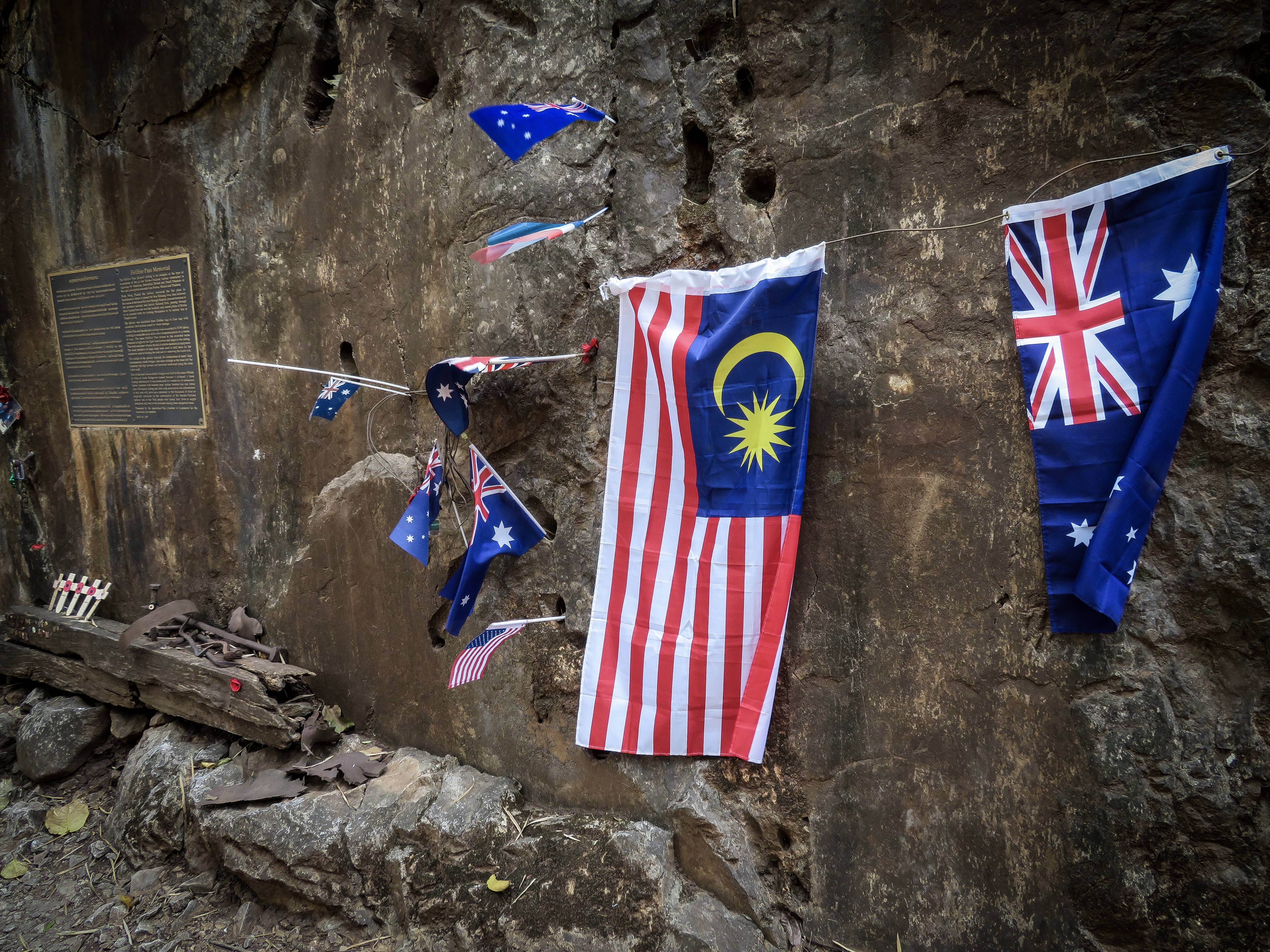 Hellfire Pass is a railway cutting on the former Burma to Thailand Railway, often called the Death Railway.

The Death Railway: A Sad History

During the Second World War the Burma to Thailand railway was built. It was built by the Japanese through brutal forced labour of allied Prisoners Of War and South East Asian workers.

Over 13,000 prisoners of war died (including lots of British prisoners). Asian labourers deaths are harder to calculate (they weren’t that well recorded) but 100,000 is estimated.

Hellfire Pass is only a small part of the old railway. It got its name from a large cutting made my prisoners through the rock by hand, which at night when all lit up by fire torches and the sounds of the hammering and emaciated labourers was reminiscent of a scene from hell.

Hellfire Pass has now been turned into a really interesting free museum and a memorial. It’s Australian sponsored, so can be a bit Australian focused but is of a very high quality.

An audio guide is issued at the beginning for free. You can then walk through Hellfire Pass and onwards. The audio guide gives a moving account of the experiences of Australian prisoners of war who worked on Hellfire Pass.

The longer walk takes a couple of hours return, along the 4km of railway whilst listening to the audio guide. The Hellfire Pass is a must see if you travel to Kanchanaburi.

Sadly, not all those who visit the Hellfire Pass respect that it’s now a memorial for those who died. There were many people taking ridiculous selfies, not reading any of the information or truly understanding the sombre history of the place.

It’s free, but you can give a donation if you want.

How To Get To Hellfire Pass:

You can take a bus from the main bus station or  flag the bus down outside the War Cemetery along road 323. It costs THB 50 (around $1.60) for a normal bus or THB 70 (around $2.20) for the air con buses. It is a bit of a lottery which one you get! The bus drops you outside the gate of the center.

Buses start from the Kanchanaburi bus station at 7:30am and are meant to go every hour from then. We sat at the bus station for 50 minutes on the first bus though.

To head back to Kanchanaburi, you can catch the return bus on the other side of the road. Go out of the gate, cross over the road, turn right and walk a bit further down to a shelter with some seats. The last bus is about 4.20pm. The journey takes about 1.5 hours. Remember to bring your passport for police checks!

Alternatively you can catch the train for THB 100 (around $3.15 USD) from Kanchanaburi or the River Kwai Bridge to Nam Tok for the more scenic but longer route. Then you can get a THB 20 (around $0.60 USD) bus to the Hellfire Pass. The last train back is 3.30pm.

You can mix it up and go by bus and return by train. 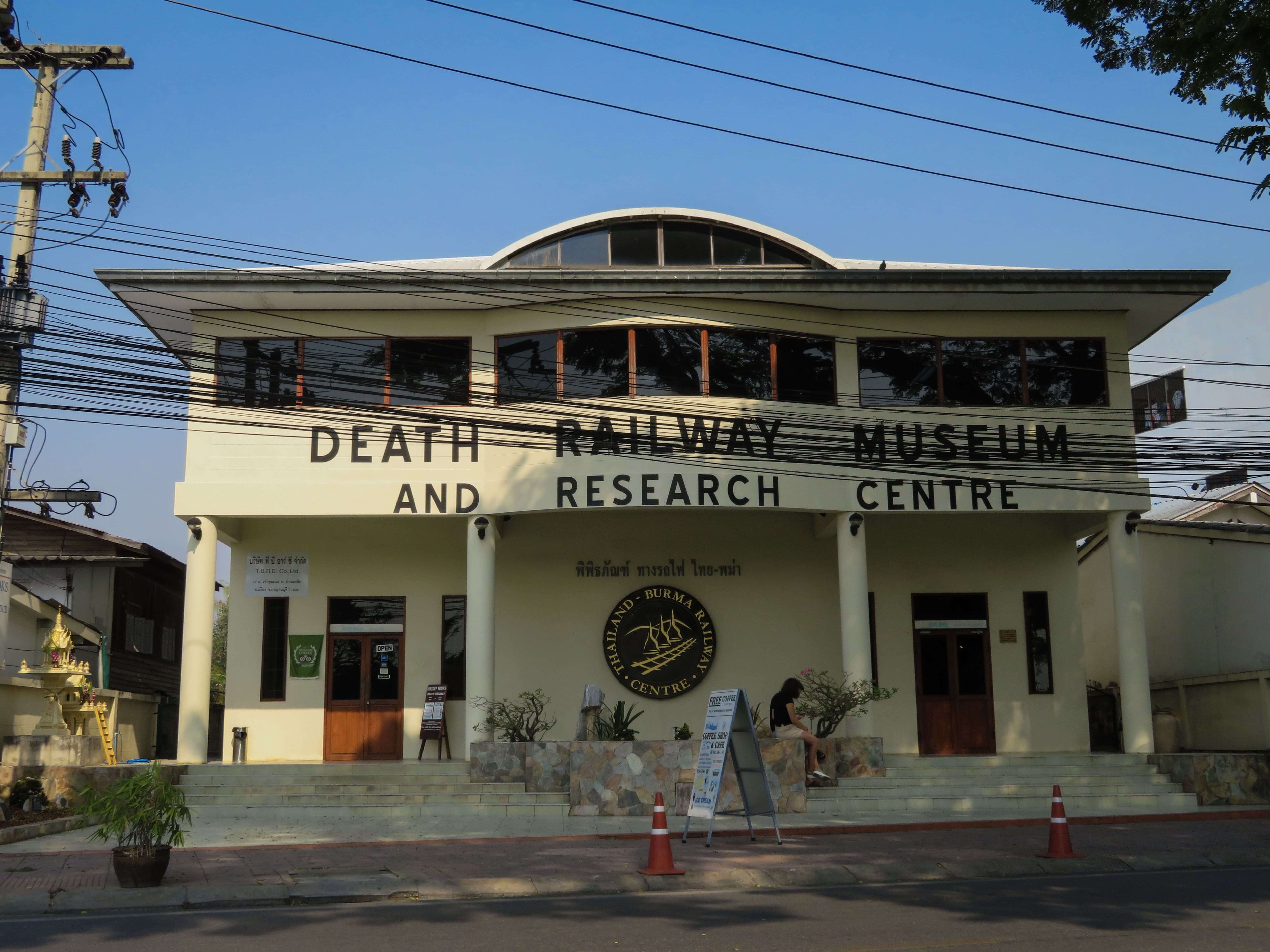 Whilst dated and like stepping back into the 90s, the Thailand – Burma Railway Research Center museum is top notch for information on the Death Railway.

A Horrible Past Not To Be Forgotten

The museum really goes explores what it was like to work on the railway for the WW2 Prisoners of War and the South East Asian workers.

It details the conditions at the work camps. The prevalence of illness, the hunger and the lack of medical equipment. And how South East Asians/South Asians were coerced into working on the railway, the behaviour of the Japanese and the war crimes trials afterwards.

Although it’s similar to the Hellfire Pass, I think both of them are worth your time if you are into contemporary history, particularly the Second World War. Both give different details and perspective to the building of the Death Railway.

How To Get To The Thailand – Burma Railway Research Center: 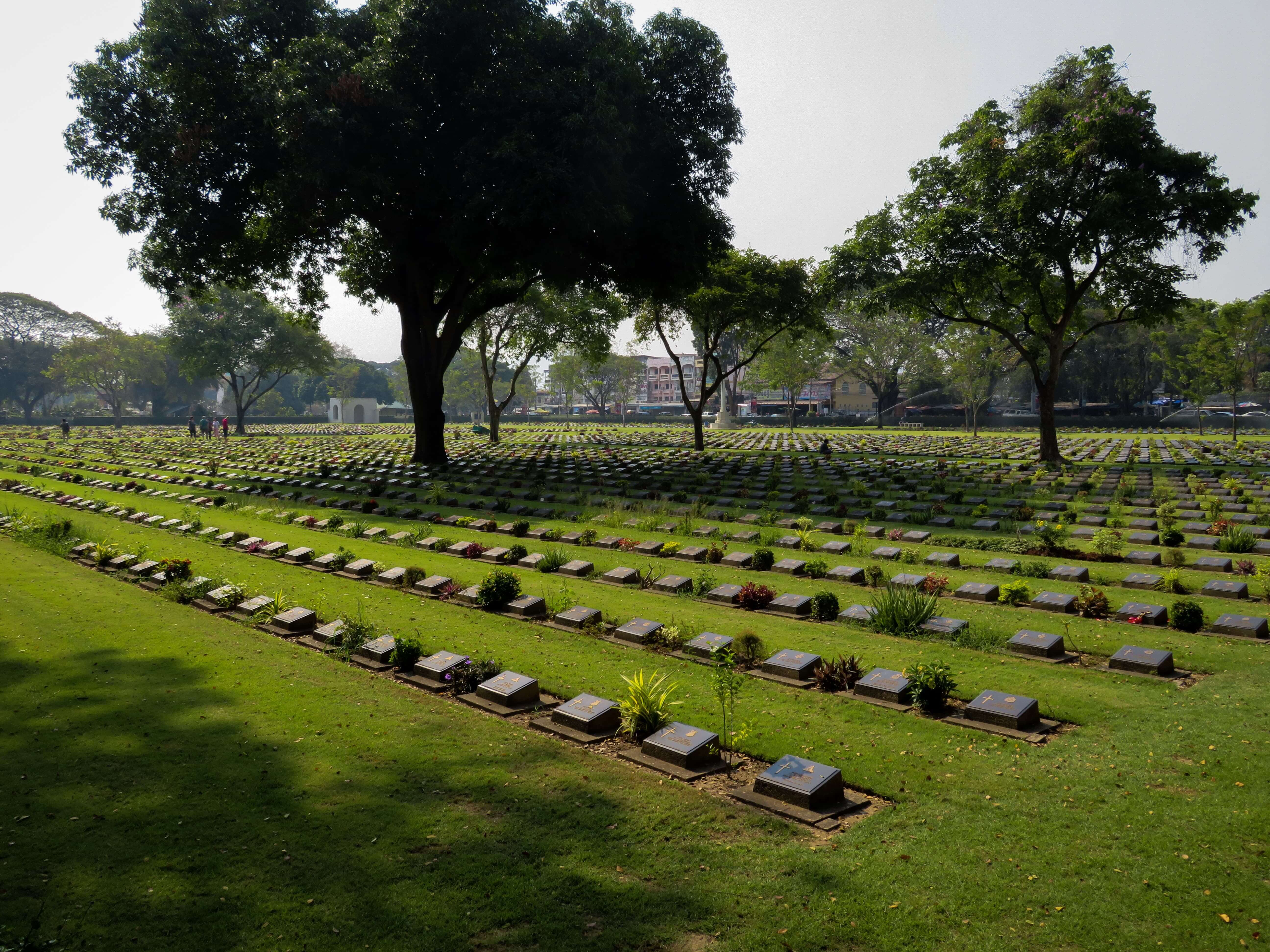 Although you won’t spend a long time visiting the Kanchanaburi War Cemetery, it’s worth visiting if you go to the Thailand – Burma Railway Research Center (Museum) as it’s just across the road from it.

The cemetery is well kept, and wandering among the graves of those who lost their lives in Thailand during the Second World War is sobering. It puts names to the tragedies highlighted in the Thailand – Burma Railway Research Center (Museum).

I saw some British grave stones, including those from my side of the country. They died so far away from home and their families. There were a number of mass graves as well.

How To Get To The Kanchanaburi War Cemetery:

The War Cemetery is at 284/66 Sangchuto Road, Kanchanaburi. It is just across the road from the Thailand – Burma Railway Research Center (Museum).

5. Bridge On The River Kwai 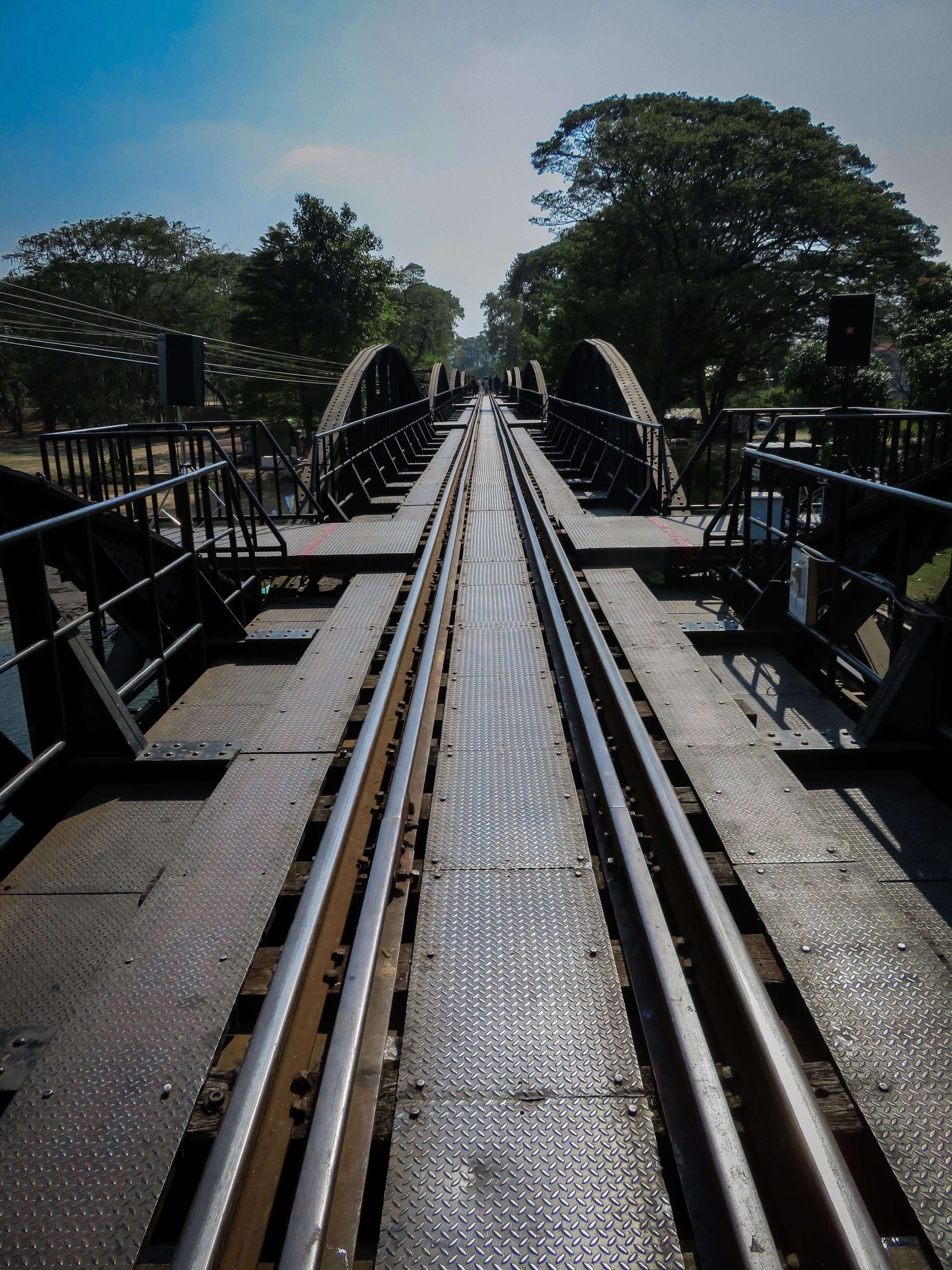 This was actually my least favourite Death Railway related attraction in and around Kanchanaburi. I felt those in charge of managing the bridge weren’t sensitive to the history of how the bridge was made.

They were blasting out Ed Sheeran or something from the bridge speakers. They then put the ‘Colonel Bogey March’ song on repeat at top volume. We walked away from the bridge but could hear it for a very long time afterwards.

It was a bridge built by contemporary slavery and is not Disneyland. Hmm!

A Heap Of Lies: The Bridge Over The River Kwai

Now it’s time for me to ruin a film. The film that made the bridge famous (The Bridge Over The River Kwai) has a number of significant inaccuracies and has been challenged by ex-prisoners of war and historians alike. Here goes:

Anyway, I digress. Visit the bridge, it’s worth it. But be prepared for it to have been turned into a slightly naff tourist destination.

Price For Bridge On The River Kwai

How To Get To The Bridge On The River Kwai

It might be best not to bother with the Death Railway Museum near the bridge (JEATH War Museum). This museum receives mixed reviews, is a bit dusty and is poorly laid out. Spend your time at better museums like the ones listed above.

My first impressions of this little vegetarian place weren’t amazing. The staff (the family that owns the place) were busy and a bit abrupt.

However, when the food came out I totally changed my mind. It was glorious. I can totally see why it has 5 out of 5 stars on TripAdvisor! We came back the next night. It serves local Thai dishes.

If you would like to do a Thai cooking class, I’d recommend doing it here. Prices are very reasonable (much cheaper than the one we did in Chiang Mai) and the food is excellent.

I was SO hangry when we stumbled on this cute little bar-restaurant. It’s got a really nice vibe, squishy sofas, cool vintage decorations and serves pretty good burgers including a veggie option. My hanger dispersed very quickly!

Zab Zab wasn’t my favourite restaurant in Kanchanaburi but it’s still good and very popular with locals. The food is affordable and decent. It can get super busy at lunchtime and dinner. Zeb Zeb serves local Thai dishes.

There is a night market near the Kanchanaburi railway station. It was OK, but options were very limited for vegetarians. Meat eaters might enjoy it a bit more!

Whilst in Kanchanaburi we stayed at the Thai Guest House. A double room is around $20 a night, which is slightly higher than our usual Thailand budget but we couldn’t find much for cheaper that was decent. The guesthouse has very good reviews and we enjoyed our stay here, particularly the shared balcony where you can sit and have a beer.


Kanchanaburi Travel Guide: How To Get There

We booked it via 12Go.Asia.

The bus had a very clean toilet, almost fully reclining seats, snacks, breakfast tea and coffee and a meal voucher for a 1:30am food stop (why though?!) and WiFi.  We left at around 8pm and arrived at 6am the next morning. We used Sasanan bus company.

Price For Bus From Chiang Mai To Kanchanaburi

Bangkok To Kanchanaburi: Bus Or Train

The train only costs THB 100 (around $3.12) each and runs along the old Burma to Thailand railway (the Death Railway). The train leaves and comes back into Thonburi train station in Bangkok.

Thonburi is a small station over the river from Khao San Road. The easiest way of getting there is by Grab or taxi for about THB 100 (around $3.12 USD). Careful as the T in Thonburi is pronounced as a hard T, not as a TH. Drivers may get confused and try taking you to Chonburi!

Once the train gets to Kanchanaburi, depending on where you are staying you can get off at the main station near the War Cemetery or carry on over the famous bridge on to the River Kwai Bridge Station.

It is a 2-3 hour journey in 3rd class, which is actually quite comfortable, with lovely views of the countryside. The train stops occasionally and you can quickly jump off and pick up food or vendors will come around.

Read more about what I got up to in Thailand:

Thailand Travel: Can You Still Do Thailand On A Budget?