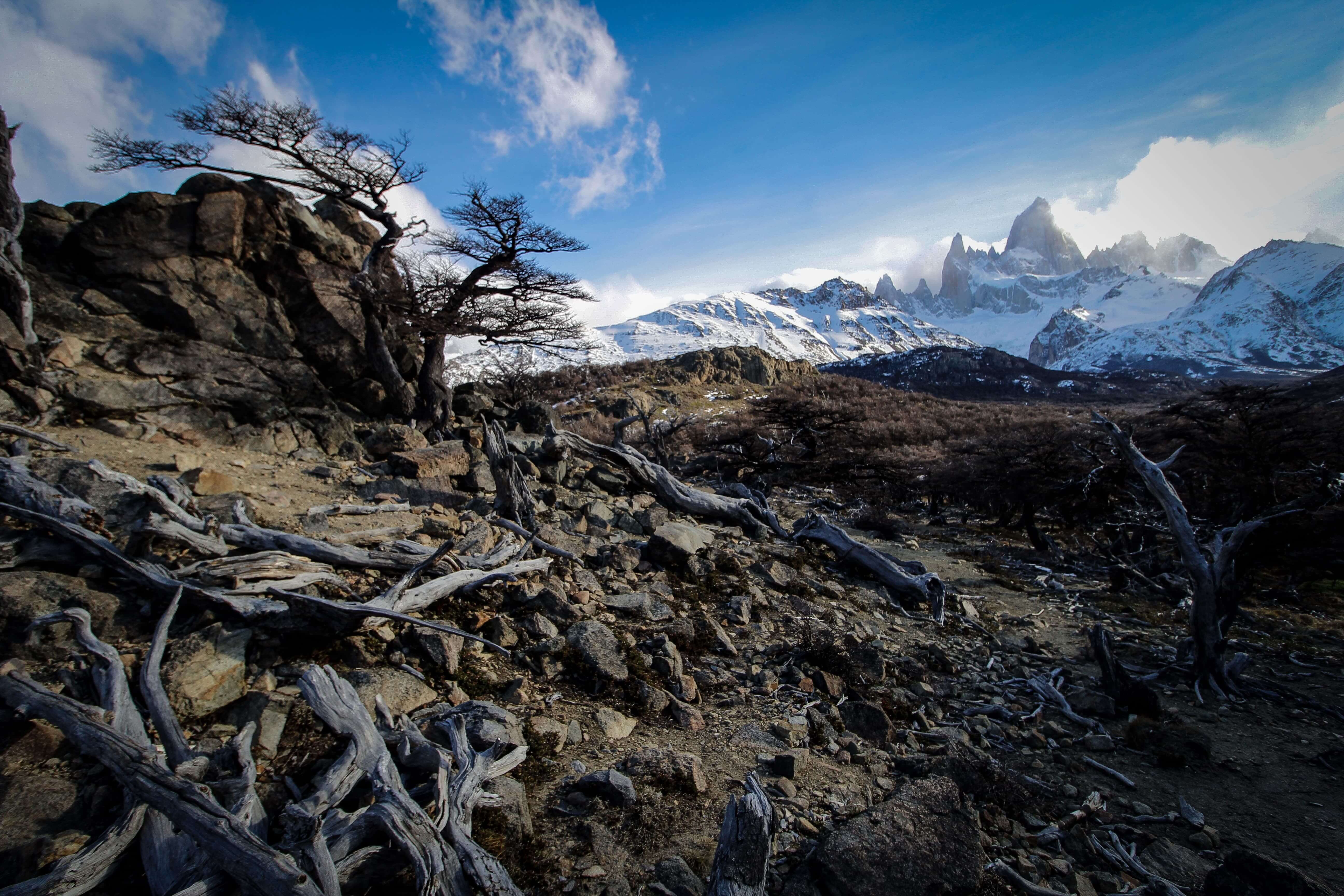 Fancy visiting El Chalten in winter? It’s certainly an experience. In this blog we share must-read advice on visiting this scenic little town in the chilly Argentinian winter. For us Europeans or North Americans, many of us are used to melting during July and August. But in Argentina (and Chile!) it’s the opposite. It’s winter for them. If you are heading to Argentina and particularly Patagonia during these months, you’ll need to crack out the winter hats, thick socks and scarfs. Patagonia in the winter is totally worth your time though, it’s waaay cheaper and a whole different icy and snowy world compared to the less harsh months.

On this page, I have used affiliate links. This means we make a little pocket money if you buy anything through the links we have given. Don’t worry, we will never suggest buying pants products and only recommend products we’ve used or would buy ourselves.

El Chalten: A Small Argentinian Town Deep In The Mountains

El Chalten is a small town situated deep in Patagonia, close to the Chilean border. It is surrounded by picturesque snowy mountains. With the most famous being the spiky and jagged Mount Fitz Roy.

El Chalten is popular for all the independent and decent length treks you can do there. The scenery is glorious and the walks are absolutely top notch.

Most walks are well marked and there are options for differing levels of abilities. 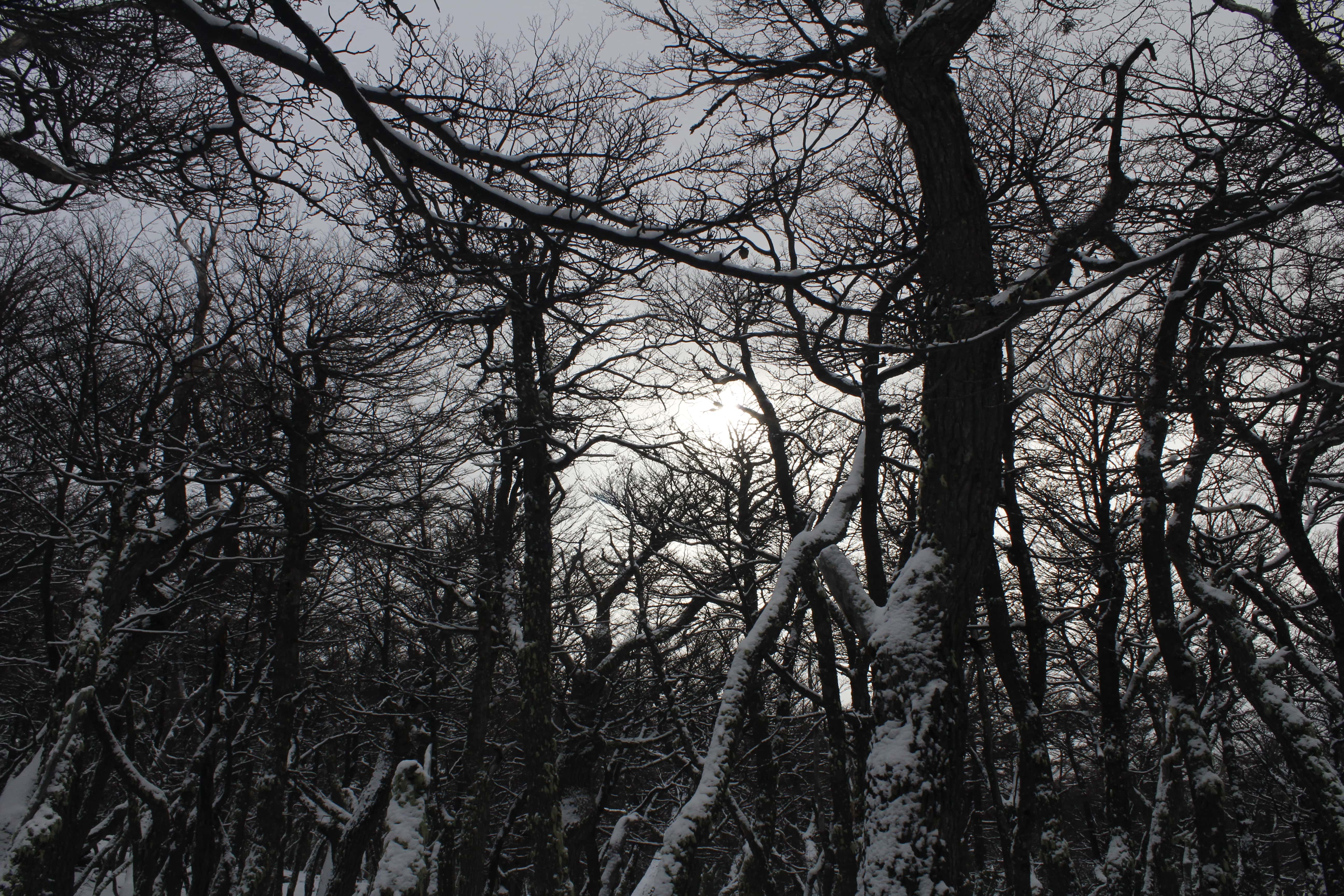 Most people head to El Chalten in the spring and summer (September to February). Due to unforeseen circumstances we ended up in El Chalten and Patagonia in the winter.

Despite the cold and epic wind, during the 4 days we spent in El Chalten we managed to do 3 decent and enjoyable walks into the beautiful mountains.

Conditions could be a bit treacherous at times, but are certainly manageable with the right gear and preparation.

Patagonia In The Winter: Limited Daylight

Sunrise in El Chalten is at about 9:30am during the winter. The sun sets at about 6:30pm. So daylight hours are much more limited than in the summer, but the longer walks are still doable. 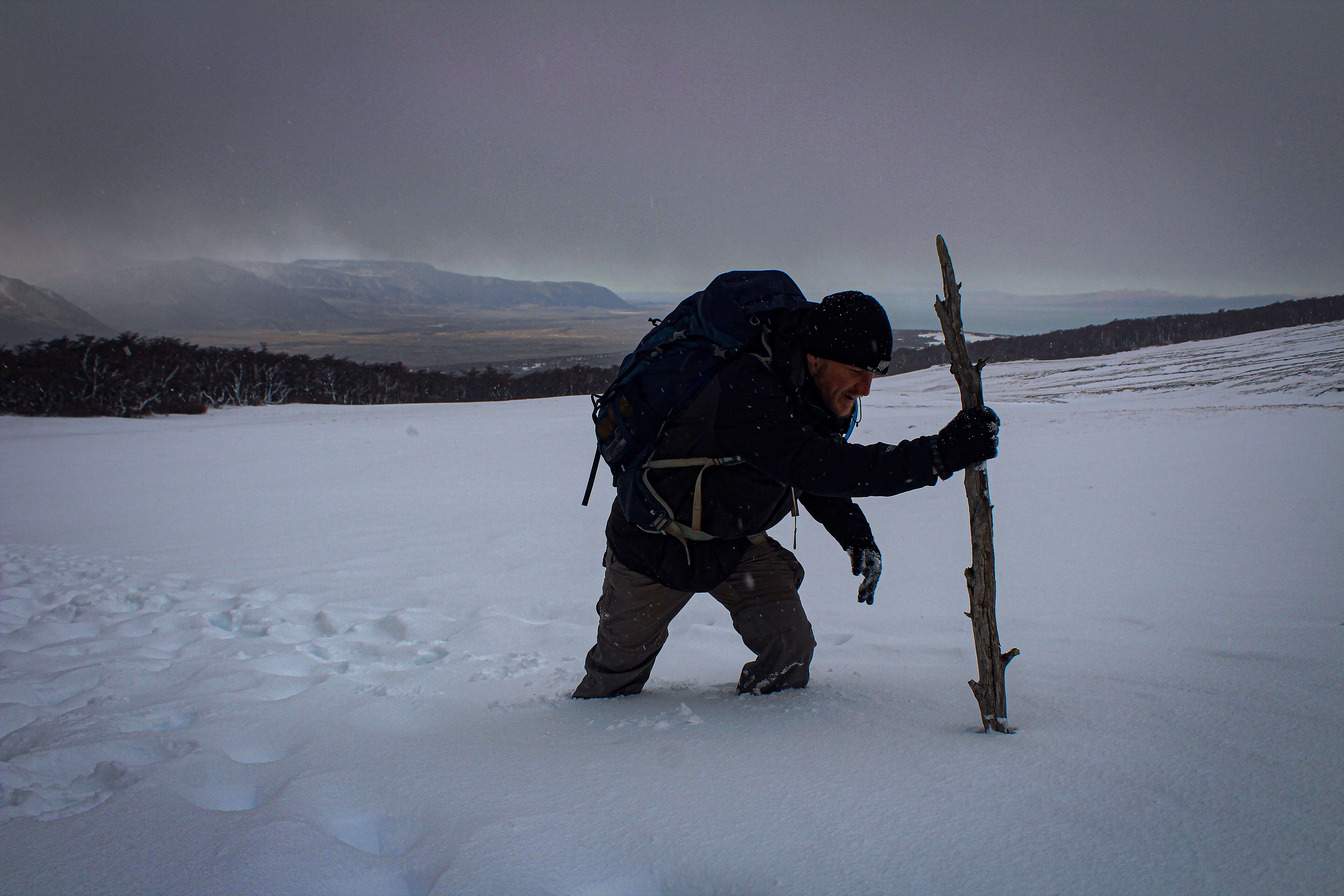 This hike is up a 1,520m mountain. We did it on a day where the weather wasn’t great. A bit windy, cloudy and rainy.

The first part was fine, although a bit soggy and drizzly.

As we plodded our way up, we entered a glorious snowy winter wonderland forest.

Finally, at the top of the mountain there was 2 feet of snow in parts. Many of the guiding posts for the walk were pretty buried.

It was an epic, exhilarating and exhausting trek up the final stages of the mountain in the deep snow. We had fun! At one point the wind descended and whipped up a bit of a snow storm. Here’s a video of me in the snow storm:

This really showed us how dangerous it could be on a mountain in this region with very changeable weather, particularly at this time of year.

The wind also covered our footprints within a matter of minutes, which we thought we could just retrace to prevent having to wade through the snow drifts again.

It did set a very beautiful scene though, with the snow drifts and surrounding rises looking very much like white sand dunes.

We wanted to get off the mountain before it got dark. Despite all our efforts to get to the summit, we only got to the viewpoint just below. However due to the weather we didn’t get any views! But I can imagine on a clear day they would be glorious.

As we headed down the mountain it was icy and slippery in parts. But as the route isn’t one of the popular ones it wasn’t too bad.

It was hard due to the thickness of the snow at the top of the mountain. Walking uphill through loads of snow really slowed us down! We didn’t have them, but snowshoes would certainly have helped and luckily we picked up some sticks, which were invaluable! 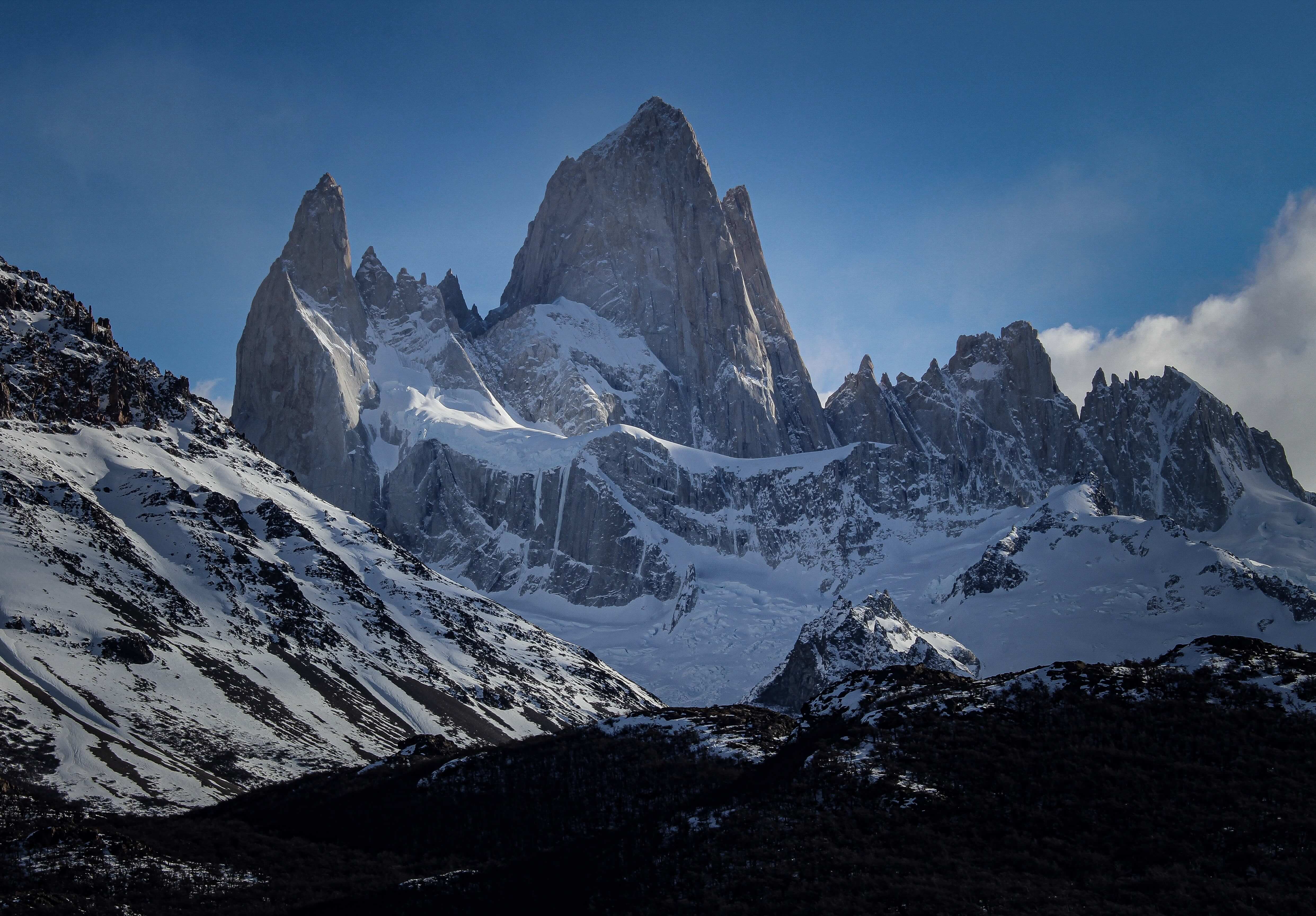 This is an easier and shorter walk than Loma Del Pliegue Tumbado (above). This is one of the more popular trails in the area as many people just visiting for the day do it.

It also forms part of the longer Laguna De Los Tres walk that we originally planned to do, but we needed a lie in after the previous day’s efforts!

It was a bit windy at times and there’s a climb to reach the laguna and viewpoint.

But as it was a beautiful clear and sunny winter’s day on the day we did it, we got amazing views of Fitz Roy and Laguna Capri. Fitz Roy looked absolutely stunning.

There was a bit of ice on the path in parts but it was accessible, especially if you pick up a stick at the start of the trail.

The park ranger told us that to get to Laguna De Los Tres that we would probably need crampons, but with all outdoor clothing and equipment shops in El Chalten closed for winter, we couldn’t rent any winter gear.

The elevation is 250m less than Loma Del Pliegue though, so I’m not sure exactly what the conditions would have been like as the ranger didn’t tell us there would be snow on the Loma Del Pliegue route!

It was fine and not a difficult walk for those who are used to walking.

This is one of the more popular longer walks in the area. It takes you to the Laguna Torre and to Glacier Grande.

The wind in the Laguna is absolutely crazy. We were nearly blown off our feet. You could lean backwards and it would hold you upright!

This hike is probably not difficult in the summer (in fact James says it is not!). There’s a little uphill at the beginning but it is largely flat.

But as the path is well used and the path water drainage is awful, we ended up walking for miles over thick ice, or where it had started to melt, through a stream.

I slipped over and fell flat on my arse multiple times. It was tedious and reduced how much we enjoyed this walk.

After slipping and sliding for hours, we got to the Laguna and glacier. But it was so cloudy we couldn’t even see the views. The surrounding area had beautiful clear skies! Typical.

This was my least favourite of the walks we did in El Chalten due to the hours of dealing with the ice. I was worried about falling over and breaking my leg miles away from any help.

Although it’s a longer walk, in the summer I’m sure it’s not difficult for those used to walking. The difficulty came from the ice. We weren’t forewarned about how icy it was by the El Chalten Information Centre. Crampons might have been very useful for this trek! James ended up using to sticks to precariously slide along large parts of the ice.

The Maps.me app has many of the hiking routes in the El Chalten area. Download it and avoid getting lost!

El Chalten In The Winter: A Ghost Town

If you are looking for a lively nightlife, to meet other travellers and eat well, I wouldn’t recommend El Chalten in the winter.

Although there are LOADS of restaurants, breweries and cute looking cafes, virtually all of them were shut during the winter.

Sorry No Service For You

In the daytime Rancho Grande was the only restaurant open. But they refused us service (despite finding a free table) as we weren’t part of a tour group. They only serve tour groups for lunch.

When we mentioned there was nowhere else to eat in town they just said, “si” and didn’t seem to care. 4 other people got refused for the same reason.

In the evening we found Cayetano Bar was open. The pizza was definitely not life changing, but the beer was decent, the music was good, it was open and they didn’t send us away with a flea in our ear!

If you want to brave El Chalten in the winter, go self catering.

We stayed at Apart Guillaumet. It was a cosy little apartment, with one of the best equipped, albeit small, kitchens we’ve found on our travels.

The owners Elizabeth and Angel are extremely lovely and hospitable.

They deliver your breakfast in the evening, so you can have it whenever you want the next day and it comes with tupperware so you can take food with you on your treks.

Are few and far between, with weird opening hours!

The supermarket we used in El Chalten was limited, the fruit and veg was pretty worse for wear, it only accepts cash and it’s closed on Mondays. Obviously being Argentina, the wine and mate tea selection is not lacking! Glug glug glug!

But we managed to cook some decent, whilst not particularly exciting meals (vegetarian lentil and chick pea chilli). We also made sandwiches for lunch.

There is only one mini market in El Chalten that takes cards. There is an ATM by the bus station, but no doubt it charges ridiculous fees (like all in Argentina). We had used Azimo in Buenos Aires to avoid these freaking crazy ATM fees, but it definitely was not available here.

How To Get To El Chalten

You can take the bus from El Calafate to El Chalten.

The bus to El Chalten is really good, comfortable and takes about 3 hours. It costs 800 pesos per person, each way.

And it stops off at a nice lodge for a rest stop. The lodge is where Butch Cassidy and the Sundance Kid hid out for a month in the early 1900s after robbing a bank in Rio Gallegos. Take a look inside, it has a mini-museum, a decent gift shop, delicious looking food and drinks and a bit about its history.

In winter the bus leaves at 8am from El Calafate.

Bus Back To El Calafate

The bus goes from El Chalten to El Calafate twice a day at:

I really wouldn’t recommend a day trip to El Chalten. There is so much nice walking in the area, it’s worthy of a few days at least, even in the winter.

If you do a day trip, you won’t be able to start a walk until 12pm and you’ll have to be back for the 5pm bus. We have heard there is an 8pm bus in the summer, but we cannot confirm this.

We stayed there for 4 full days and enjoyed relaxing in the mountains.

If you do head there for a day trip there are some shorter walks you can do, such as:

The bus doesn’t get in until 11am and then all tourists have to go to the information centre.

In the centre they give information on the walking trails and safety. Although it was helpful, we weren’t told about some of the really poor and difficult conditions on a few of the walks we did. Also it was only open from 10am to 5pm so we couldn’t let them know when we were heading out or had got back.

Don’t Get In Trouble On The Mountain: Equipment & Safety

In summer you can rent or buy trekking equipment in loads of shops in town. In winter NONE of them are open. Make sure you bring ALL your own gear.

On our treks, we used and brought the following equipment:

Did You Find This Blog Helpful?

We are only small and would appreciate you sharing this blog 🙂

5 comments on “El Chalten In Winter: Trekking Among Snowy Mountains”