Home » blogs » How To Get From Argentina To Paraguay: Things You Really Need To Know

How To Get From Argentina To Paraguay: Things You Really Need To Know

Are you in Iguazú and fancy popping over to Paraguay for a few days? Well, here is the complete guide on how to get from Argentina to Paraguay, or more specifically Iguazú to Encarnacion. We enjoyed our brief trip over the border to Encarnacion!

We visited Encarnacion as it was easily accessible from Argentina.

Encarnacion has a river beach and is close to a number of Jesuit monastery ruins, especially the ones in the town of Trinidad. It seemed more interesting than the other border towns we looked at. These tend to be just shopping hubs for Argentinians wanting to pop over the border and grab a bargain.

What Is Paraguay All About?

Here are a few interesting facts about Paraguay. In case you like me, knew nothing about this South American country and love random facts. Here goes:

Not The Most Happening Place

Encarnacion is not the most happening place in the world, but was pleasant and interesting to visit for a few days.

Iguazú To Encarnacion: A Faffy Journey

It’s a total faff to get from Iguazú to Encarnacion. Our journey on the way there was smooth, but on the way back it was a pain.

To get near to where you can cross over to Encarnacion, you first need to get from Iguazú to Posadas. Posadas is a border city still in Argentina. From Posadas you go over the bridge into Paraguay.

7am Bus From Iguazú

We got on the bus from Iguazú at 7am. The bus journey was pleasant. We booked our tickets in advance with Rio Uruguay bus service. We got to Posadas bus station at 12:45noon. The Posadas bus station is not near the bridge to cross over to Paraguay. You have to take a bus or taxi to the bridge.

Skip The Queue: Take The Train

From Posadas, we planned to get a bus to the train station to cross the bridge to Paraguay, as we heard of massive queues of traffic on the bridge. Taking the train would mean skipping this queue.

3 people told us the train across from Argentina to Paraguay wasn’t working.

If the train is working, you can just jump on a bus from the main Posadas bus terminal to the train station. Take the number 31 bus. It costs 28 pesos each. You can pay in cash at Posadas bus station.

Bus From Posadas To Encarnacion

45 Minutes To Get Through Posadas

The bus took 45 minutes to get through Posadas due to stopping and starting and traffic.

The bus stopped at the Argentinian immigration and we all passed through immigration quickly, getting our exit stamps.

Byyyyeee: The Bus Just Drove Off

Half of us got back on the bus and it drove off leaving the rest!

Make sure you get to the front of the immigration queue to avoid the bus leaving you due to impatient bus drivers! Keep your ticket as you can use it for the next bus if the first one drives off.

It took 20 minutes to cross the bridge on the way over from Posadas to Encarnacion. To note, on the way back it took OVER 1 HOUR.

We stopped at Paraguay immigration on the other side so we could get stamped in. Most people got off and the bus drove off (of course). At immigration they asked us how long we were staying in Paraguay. We didn’t have to prove onward travel.

As our bus had driven off, we got a taxi to our hotel in Encarnacion. We got ripped off by the taxi driver.

To avoid rip of taxi drivers, I’d recommend if your bus drives off waiting for the next bus in half an hour. This bus will take you to the main bus station in Encarnacion and actually goes all the way through town and stops in the North East of the main bit of town.

Step 3: Back Again Encarnacion to Posadas

Our bus in Encarnacion spent an hour driving around Encarnacion before we got to the Paraguay immigration office just before the bridge.

2. Will We Ever Get Off This Bridge?!

We spent over an hour stuck in a queue on the Paraguay/Argentina bridge.

You CANNOT get off the bus and walk, the bus driver would not allow it and said something about the police. Despite walking being quicker than taking the bus…

This is because the Argentinian border entrance is much stricter than the Paraguayan one.

There is a time difference between Encarnacion and Posadas. Posadas is 1 hour ahead of Encarnacion. We are dumb-asses and totally forgot about this.

Don’t be dumb-asses too! You need to factor this into your travel time on the way back. I’d recommend giving yourself 4+ hours to get from Encarnacion to Posadas if you do it by public transport.

Why Is There A Train Going Past?!

Despite being told by 3 people that the train between Argentina and Paraguay was not running, the train went past us 4 times on the bridge on the way back. WTF?!

We might have been unlucky, the train might have started running again in the 2 days we were there. Who bloody knows.

Little-Known Tips For A Painless Journey Between Paraguay And Argentina

Things To Do In Encarnacion, Paraguay

I ain’t gunna lie, there is not masses to do in Encarnacion.

However, here are 4 things you should do:

1. The Jesuit Ruins: A Whole UNESCO World Heritage Site To Yourself 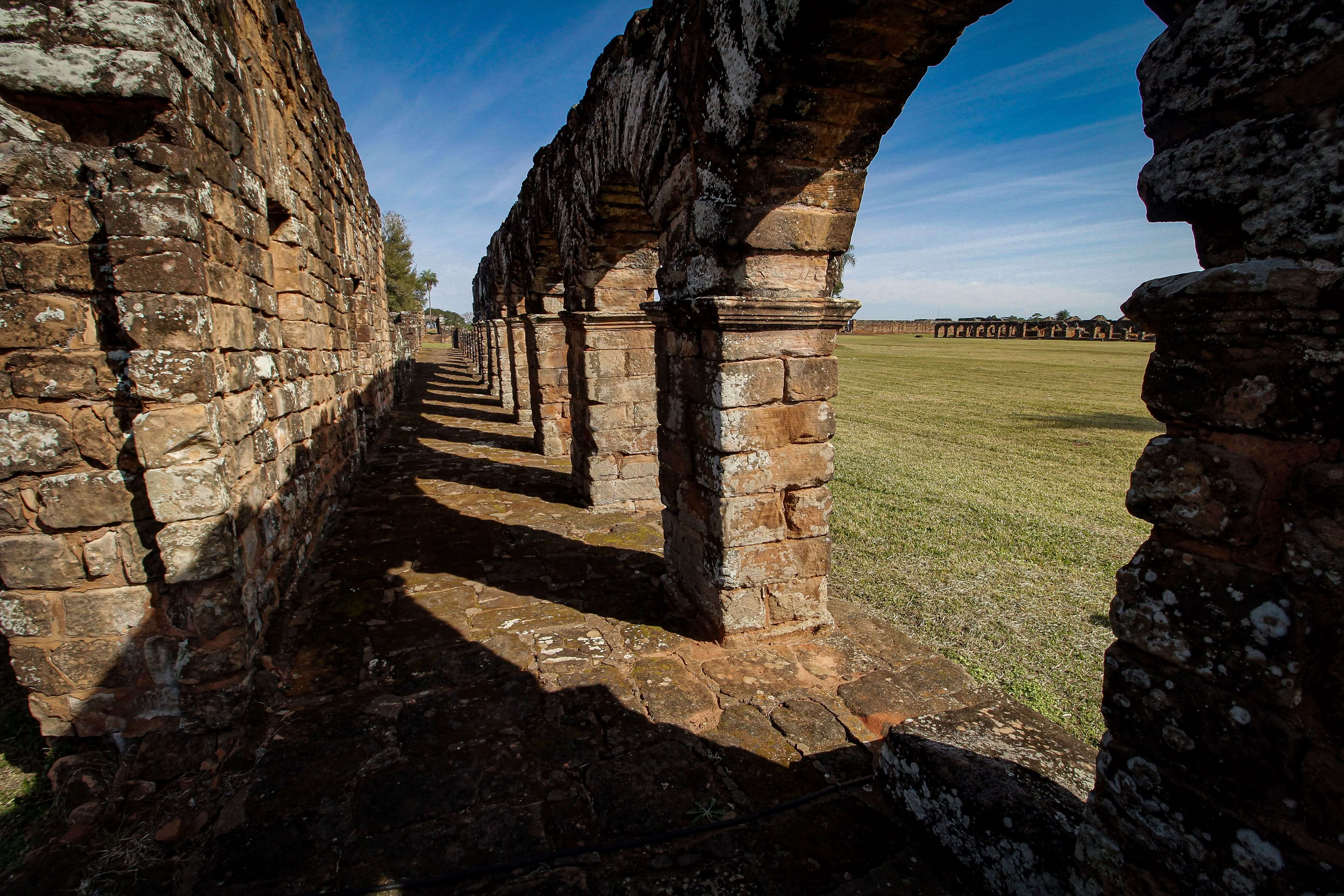 There are 3 main Jesuit Ruins nearby. The main one is in Trinidad and your ticket (25,000 guaranis each) covers entrance to all 3. The Trinidad ones are totally worth a visit. You may need to rent a car to see the others.

There is no jostling with selfie stick tourists or insta-models at this attraction. We had the whole place to ourselves.

It was declared a World Heritage Site by the UNESCO in 1993. These Jesuit Ruins were created in the 1600s by the Jesuit missioners during the colonisation of South America. The Jesuit Ruins of Paraguay are considered some of the most impressive creations of the Jesuits.

The Jesuit ruins are impressive, interesting and well preserved. There is a slightly cheesy information video near the ticket office that you should not miss.

How To Get To The Jesuit Ruins:

You can jump on a bus from the central bus station in Encarnacion or from Ruta 6, as the bus leaves town. The Trinidad ruins are about 45 minutes from Encarnacion.

Use the Maps.Me app to direct you there, you can use it offline.

The bus was 7,500 guaranis each on the way there and 10,000 each for the way back. The return bus was slightly better so maybe that’s what the extra 30 pence was for?!

Just tell the driver or the driver’s assistant “Voy a Trinidad por las ruinas por favor”. They’ll get the gist and tell you when to get off.

2. Splash Around On The River Beach 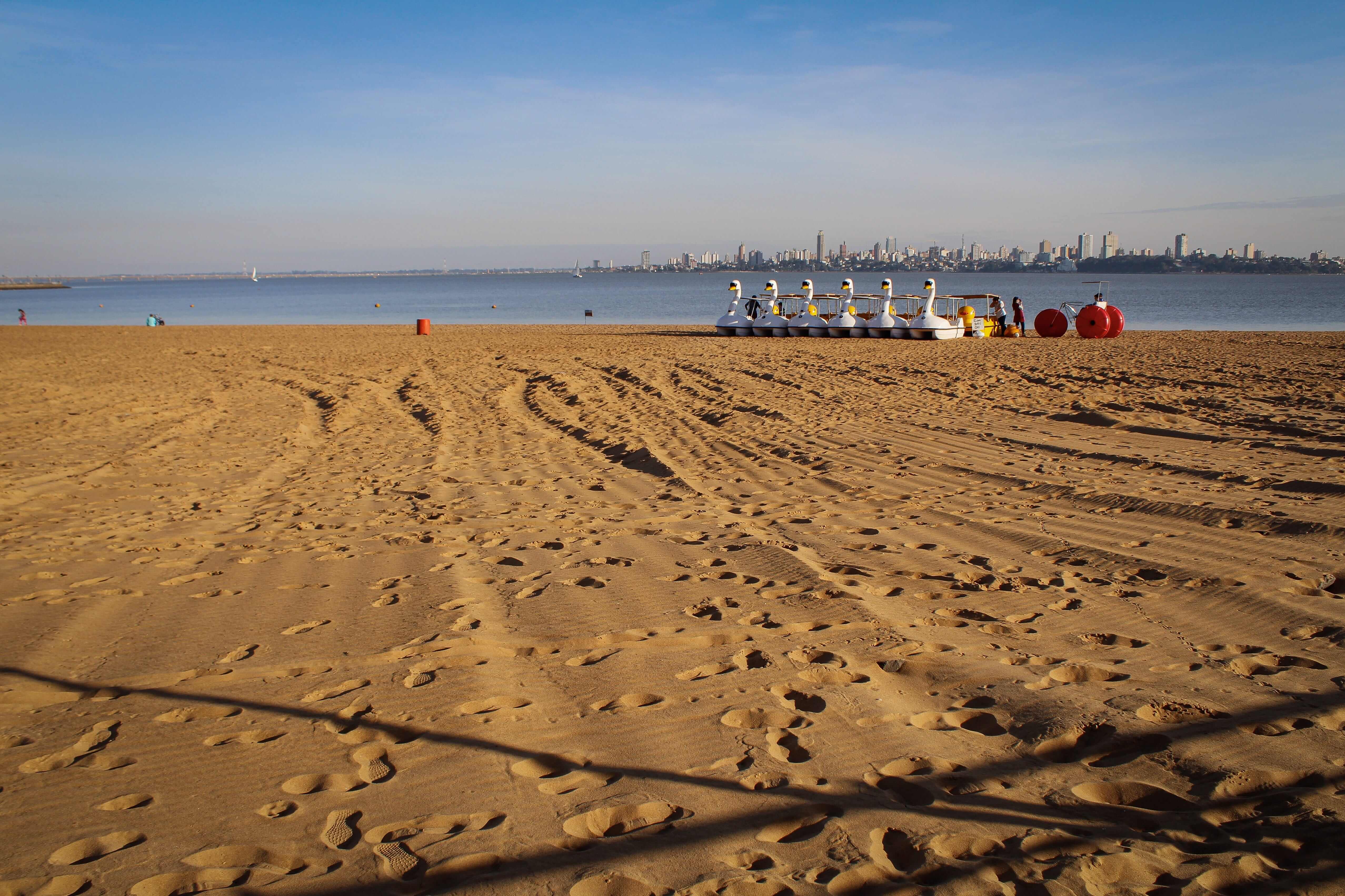 Encarnacion has a pleasant beach called Playa (pronounced Plaja in this part of the world) San Jose.

The water was damn cold when we visited in July, but I think it warms up in the summer months.

Encarnacion is a popular beach tourist destination for Argentinians. There were swan pedalos and various beach related equipment available. Disappointingly no one was around to rent us a swan when we were there! Booo.

3. Walk Along The River At Sunset 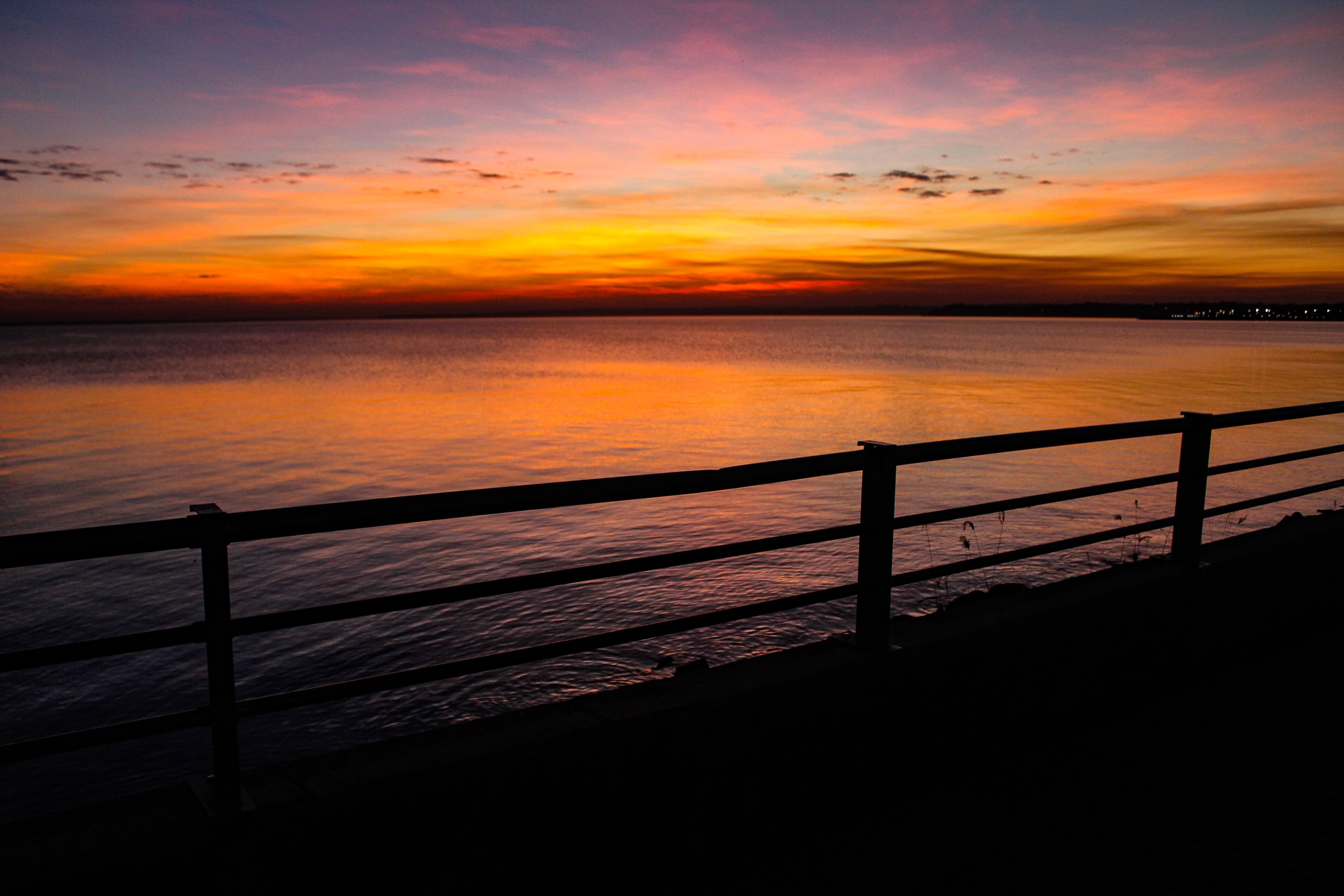 There is a lovely long walkway going along the river. You can walk it for miles. At sunset it’s particularly glorious.

The sunsets in Encarnacion are beautiful. You’ll see joggers plodding along the walkway, and friends and families with huge flasks of hot water for their mate tea out enjoying the sunset. We also saw the local women’s rugby team using the space for training.

Encarnacion certainly lives up to Paraguay’s chilled out reputation. Although at certain times of the year (Jan/Feb) they get into carnival atmosphere and they have a special carnival stadium near the beach.

This square is nothing to write home about, but it’s not terrible. It has a tiny market you can buy mate tea cups and other crafts, and randomly a Japanese garden.

Well, that wraps up our guide on how to get from Argentina to Paraguay (and back again). Do get in touch if you need anymore help!

We Are Only Little!

If you found this blog useful, do share it with your friends, family and most importantly fellow travelers!