My Story: The Annapurna Circuit 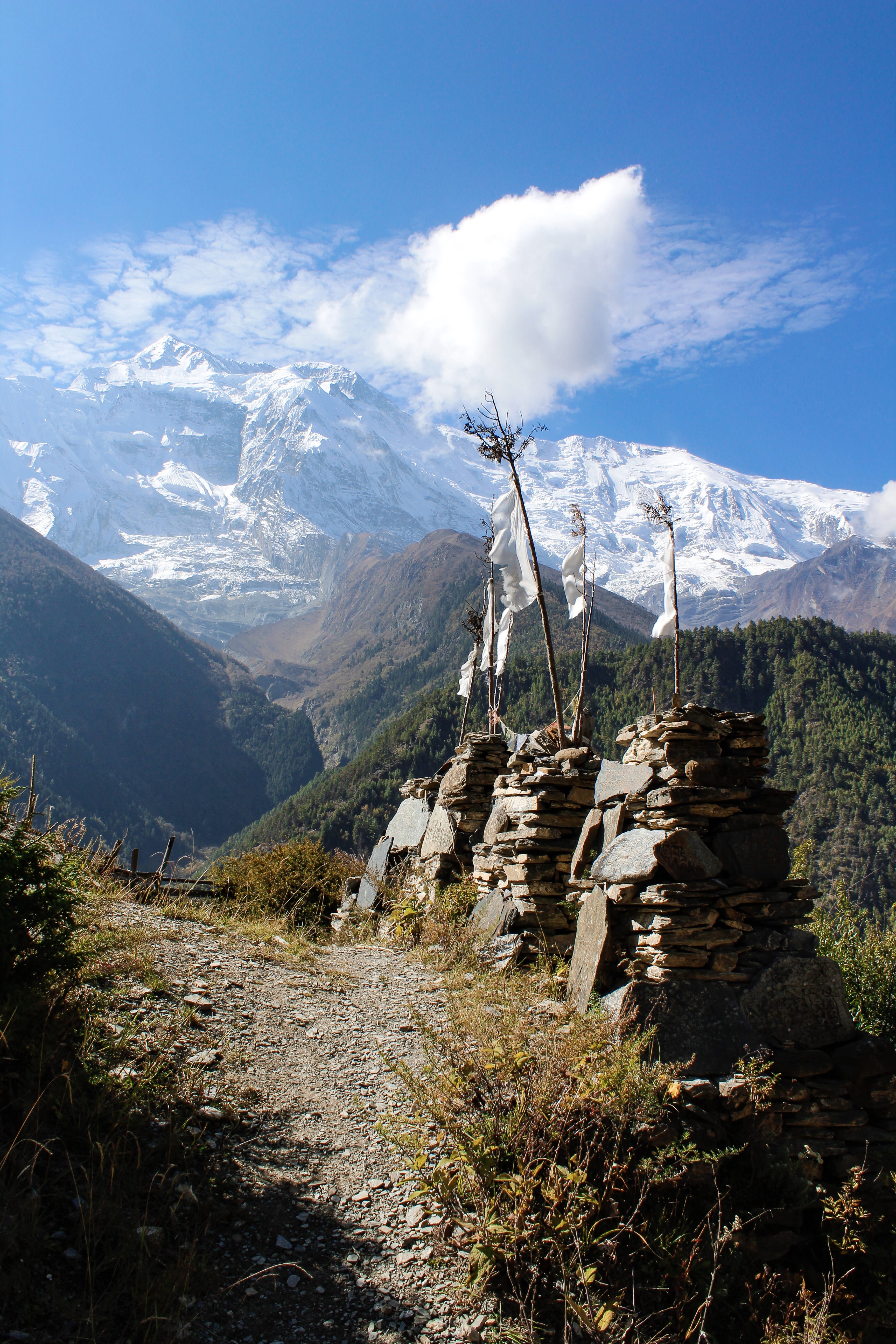 Nepal: the Annapurna circuit, spiders from hell, a boob massage and almost puking up on a Nepalese Rasta.

Nepal is located between India and China (Tibet). We spent 15 days trekking the Annapurna Circuit in the Himalayas. We did a 160 mile route (unless google is lying to me). The Annapurna circuit is renowned for being one of the best long distance treks in the world, and my did it deliver!

Read about how we did the Annapurna Circuit without a guide.

Our first few days of walking were in the lush lowlands, starting in Besisahar. We passed through paddy fields, villages, subtropical forests, waterfalls and got our first taste of the epic metal suspension bridges – not for the faint hearted!

This part of the trek included the spiders from hell. One night, I sleepily got up at about 2am for a wee only to find BOTH squat toilets full of red eyed huge spiders. I decided I’d rather pee on the grass outside the toilet. I’m sorry owners of the hotel.

Lots of people miss out the lowlands when trekking the Annapurna circuit and jeep to further up the trail. I really do think they are missing out on so much though, particularly when it comes to really building up an understanding of how people actually live in the mountainous regions of Nepal. Further up, many of the towns are largely geared towards the tourist crowd whereas this wasn’t as much the case in the lowlands. The locals are amazingly friendly and welcoming.

For a westerner, their lifestyle is humbling. I’d complain about how heavy my bag felt then see extremely old women carrying huge amounts of crops strapped to their heads whilst wearing sandals. It’s not like they have pensions or state support here, so if these women were to stop, they’d have no food or incomes.

At one point, we walked for miles with kids who’s journey to school took them 2 hours each way and a boy asked us if we had a pen he could have for school. It makes you remember how much easier we often have it coming from somewhere like the UK. 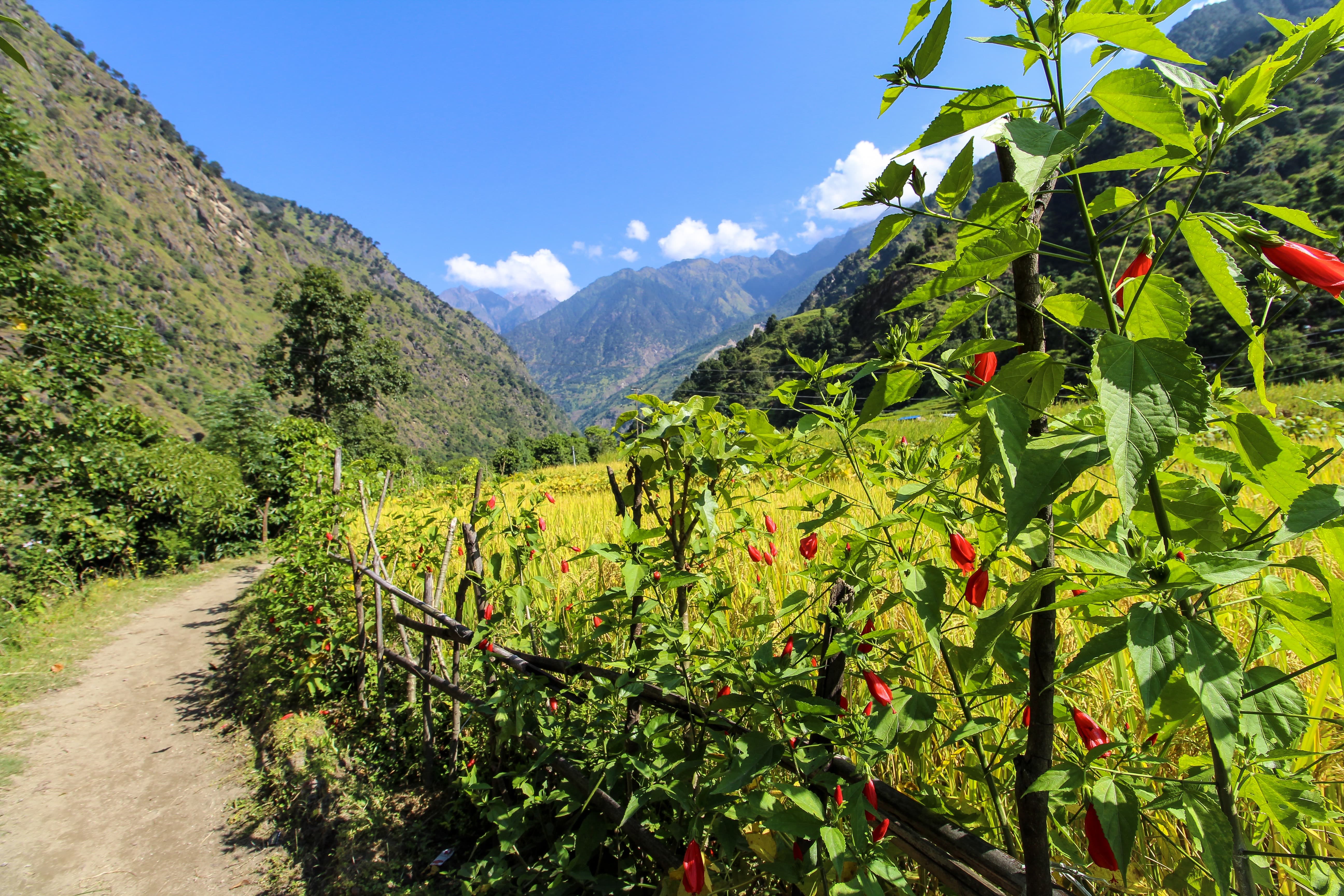 Getting up in the mountains

We carried on and the landscape began to change dramatically. It got steadily colder. In Danaqu we stayed in a lovely guest house, complete with a cosy living room and a warm fire. We got chatting to a porter here, who explained about his life in Nepal. He had to give up his life as a monk as his father had passed away and he had to support his mother and the rest of his family. Once he left, he could not return to be a monk.

We also met a woman called Rosa here, who is a true free spirit and had been travelling for years. Her mantra was to stay in places for a good long while, volunteer and travel and actually get to know the people. She was very warm and was best friends with the hotel owner by the end of the evening.

This got me thinking about how much I’d burst out of the London bubble. In London I spent so much of my time with my head down on public transport, trying to ignore everyone and everything around me. I’d rarely really meet new people, and even when you do there is often a distance kept between you compared to the world of travellers. I’d forgotten what it’s like to travel, to just get chatting with loads of people along the way and for the walls between people to be broken down easily. 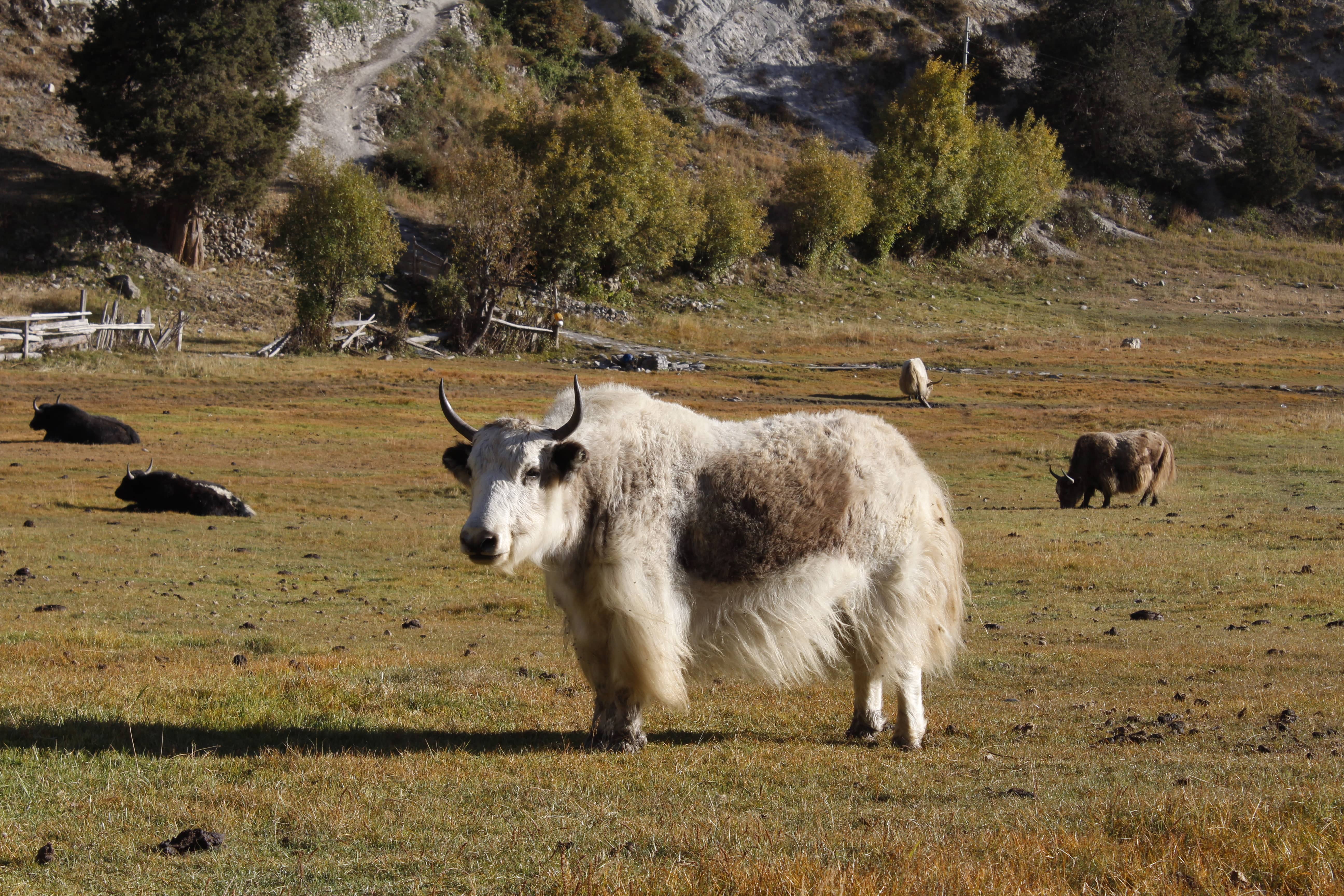 As we got up higher, we moved into yak country. After freezing our arses off in a wooden shack in beautiful Ghyaru (the accommodation was beginning to get more basic!), we found a very lost retired maths teacher called Simon. He came with us to Bhakra, where we met Ewa and Derek. These three then became wonderful companions on our journey through the Annapurna circuit.

Whilst in yak country, I noticed that yaks seem to have a ‘witching hour’ (about 6pm). Suddenly they go a bit bananas and start chasing dogs. I was out taking photos of them one day during witching hour. A yak charged at me, I tried to run away and tripped headfirst into some yak poop (nice!). A tiny elderly Nepalese lady came to the rescue. She somehow scared away the huge yak and saved my stupid tourist arse.

Bhakra was the point where the altitude began to affect me, and much of our group. Ewa, Simon and Derek were very worried about the altitude and rightly so. Just the night before meeting us, they had seen the very serious consequences of it.

A guy in their hotel hadn’t been heard from for 24 hours and he had been complaining of a headache. The hotel owners had knocked on his door, but there had been no answer. They broke down the door to find the guy unresponsive, white as a sheet and very close to death. Ewa luckily is medically trained (she’s almost a doctor) and another member of the group had the right altitude medication and a syringe to treat him. This got him back to being vaguely responsive, and he was carried out on a blanket to the rescue helicopter.

This was certainly a wake up call for Ewa, Derek and Simon on the dangers of altitude, and James and I too from hearing their story. 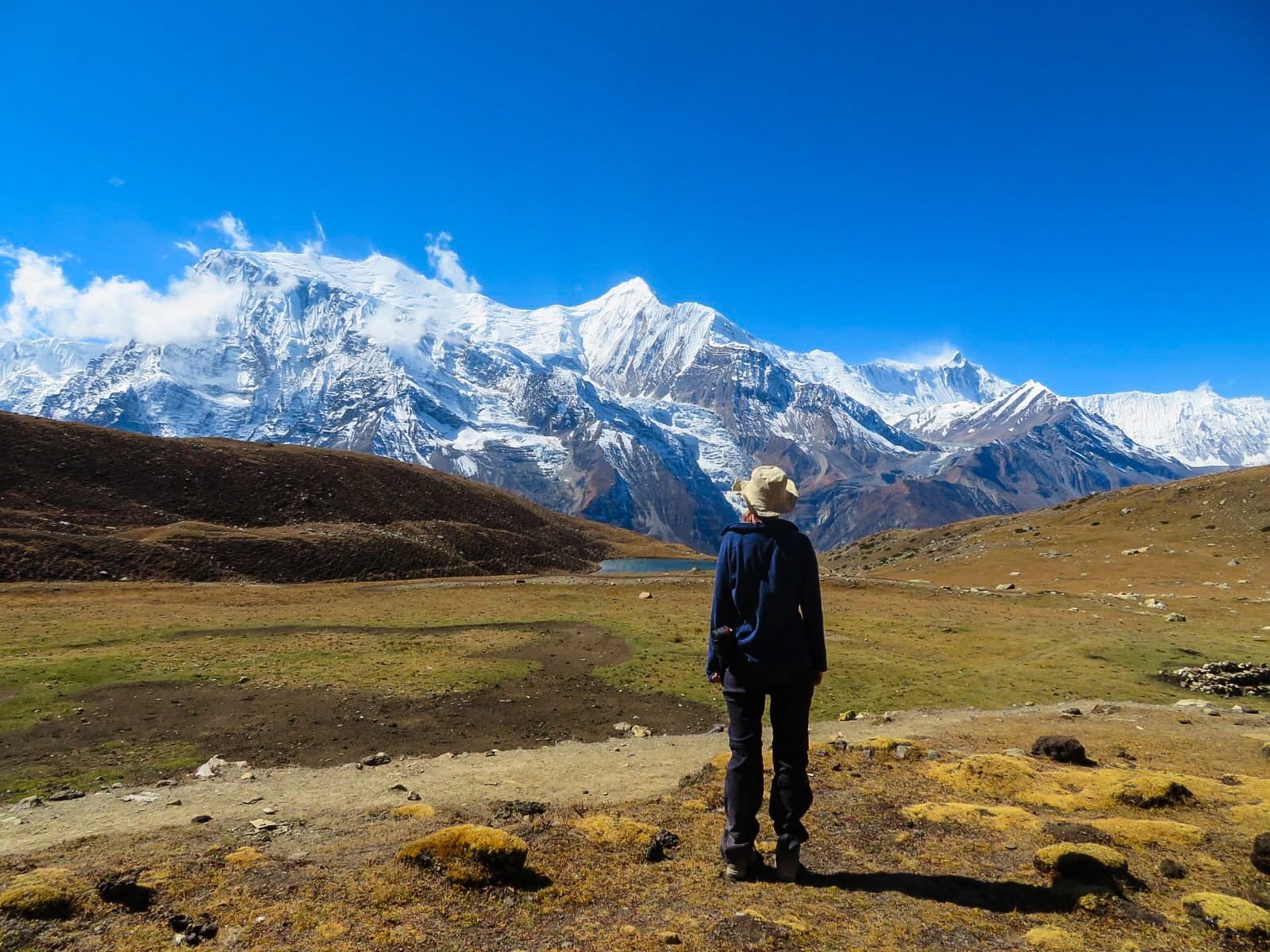 From then, as a group we went up slowly. We had altitude training days where we went up 1200m to 4600m then came down again (the Ice Lake was awesome). The speedier members of the group (James and Simon) would often push ahead and get us all accommodation. At this point we tended to trek for only a couple of hours a day, with the rest of the day spent drinking tea and chatting about the altitude, not showering and how long we had worn the same clothes for.

Ewa, Derek and I had a great day being the “floundering fishes”. We gave ourselves this name due to how much all of us had to gulp for oxygen at altitude! The mountains at this point were absolutely breathtaking – in more ways than one!

Getting over Thorang La Pass 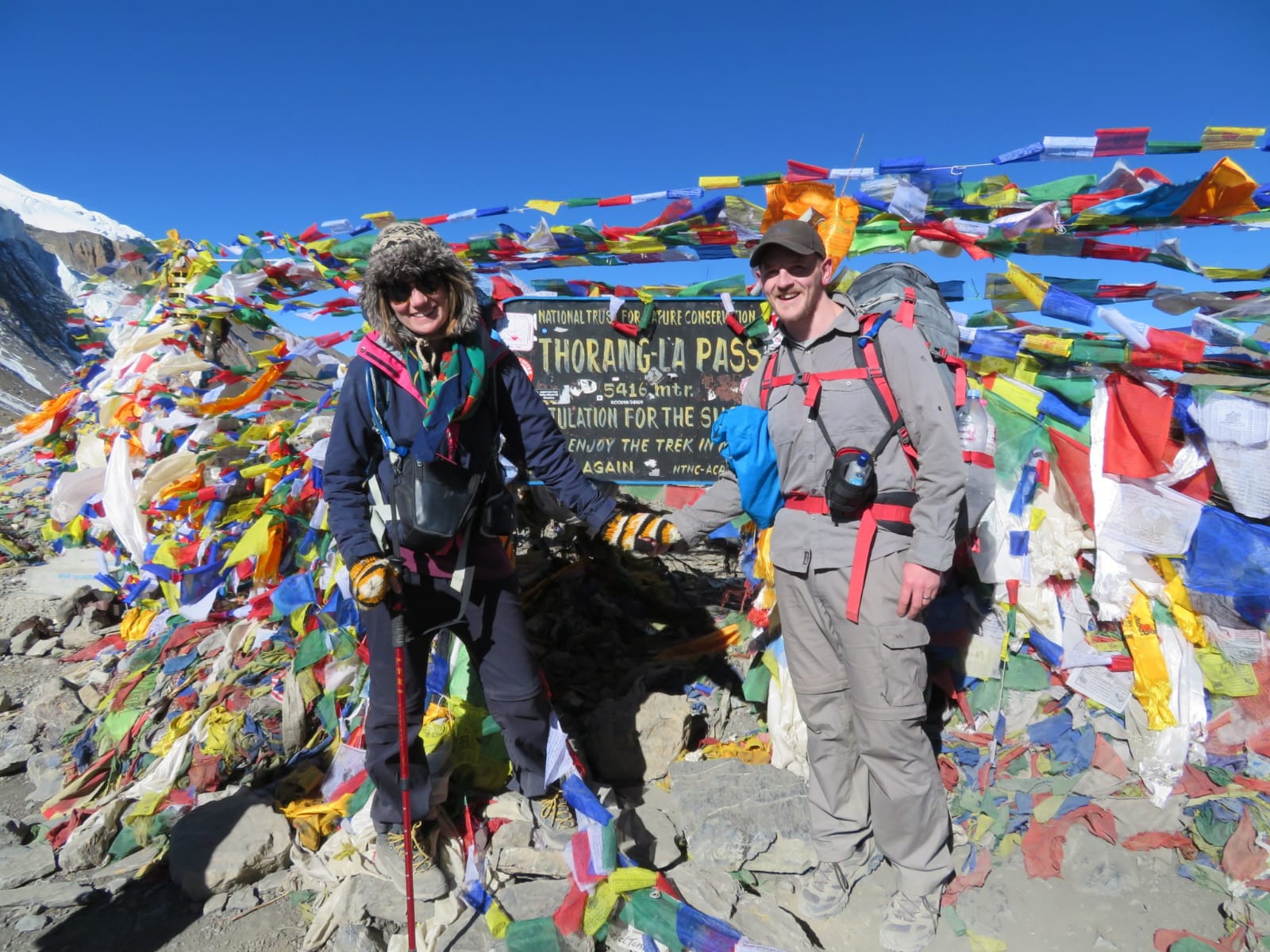 We all got over the Thorang La Pass with our stuff, which is 5400m up. Well done us! We survived freezing (minus 10 at the coldest) and sometimes downright awful accommodation, 5 days without really showering, terrible toilets (at one point there was just shacks full of human shit), a serious lack of basic things like sinks and the odd rat.

At the pass, I cried lots as with the altitude and conditions I had found it so so difficult. It was so worth it though, I had an immense sense of achievement. My body had got there, I had done it!

After crossing the pass, I managed to acquire a stinking cold and cough. With back pain as well, I was officially falling apart due to the Annapurna Circuit! We ended our 15 day trek in Jomsom, and decided to head to Pokhara for some rest and recuperation.

The treacherous bus from Jomsom to Pokhara

Before we could have a taste of this rest and recuperation though, we had to take the bus from hell. James is a hardened traveller and it was the worse bus journey we’d both ever experienced. 13 hours to go 56 miles AND the first 25 took 9 hours. It was like riding a raging bull for most of the journey. Most of the way there was no actual road and at points we drove along river beds. We had blisters on our hands from holding on so tight, saw a huge landslide, I hit my head on the roof and the bus almost flipped multiple times. I got off it a shaken mess, but we were in Pokhara at last!

Pokhara is a glorious place for the tired trekker. It’s got loads of hippie restaurants and a lovely chilled vibe.

After a day or so of relaxing by the lake, I booked myself a massage. I researched and asked around, making sure I had a “legit” place. Being the naive westerner, I assumed a trekkers massage would be exactly like I’d get at home. Calm and relaxing….How wrong I was. A small Nepalese lady jumped on my back and pulled my joints out. She then poked me in various places and clicked all my toes.

She then pointed at my boobs. I said “oh it’s okay, don’t worry about them”. This is where there was a language barrier and she whipped the towel off and started massaging my boobs. I was so British and awkward and slightly curious I didn’t stop her. The massage was then finished with her French plaiting my hair. My joints felt better, but I was very bewildered. Not such the relaxing experience I was expecting though!

Almost puking on a Nepalese Rasta 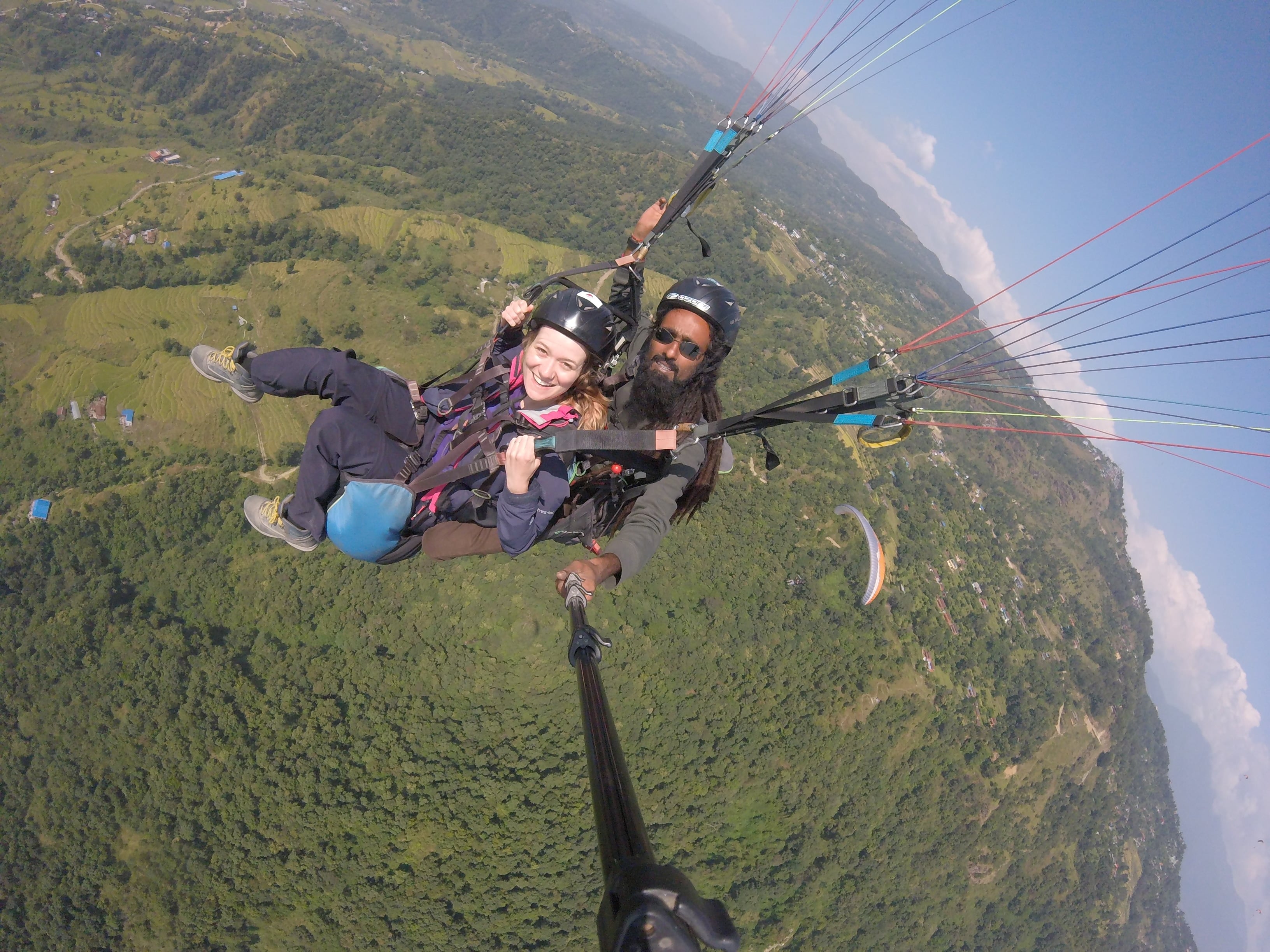 In Pokhara, we went paragliding with Team 5 Nepal Paragliding. It was absolutely beautiful and the views were amazing. My pilot was a Rasta with huge dreadlocks. What a cool dude! Shame I almost puked on him though, as he spun me around lots. I had to get out of the van on the way back to the paragliding office and dry heave at the side of the road. Needless to say, the Nepalese paragliding pilots all found me hilarious when I had to sheepishly return to their office a number of hours later to collect my photos. Just another day in Nepal…